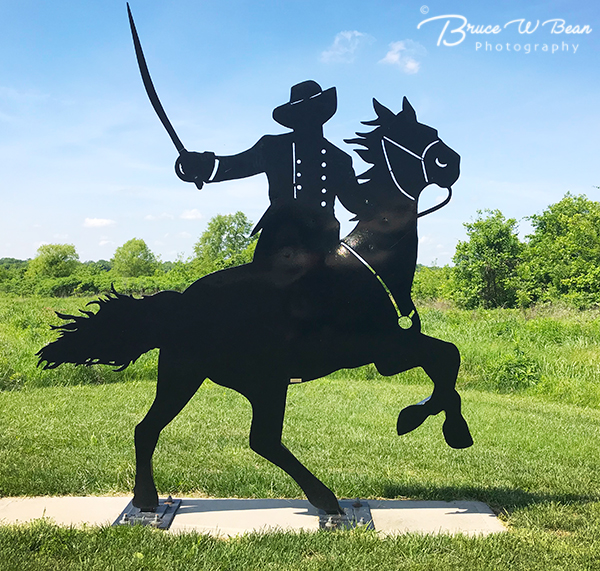 The Battle of Mine Creek was the final significant military engagement of Confederate General Price’s unsuccessful incursion into Missouri. Having failed in his plan to take St.Lous and Springfield he was then defeated by Northern forces in the Kansas City area at the Battle of Westport.  For more background on the Westport actions take a look at a previous article –  Battle of Westport.

The Battle of Mine Creek –

Following his defeat in Westport, General Price’s troops withdrew to the south along the Kansas / Missouri border.  The Confederate retreat  bogged down at the Mine Creek area, about 60 miles south of Kansas City,  due to the creek’s steep banks and deep water with only one practical area for the thousands of troops and 500 supply wagons to safely cross.  Pursuing Northern forces caught up with the Southern troops on October 25, 1864 on the prairie lands on the north side of Mine Creek. The ensuing engagement was one of the largest mounted cavalry battles of the Civil War. Northern forces numbered around 2500 while the South had nearly 7,000 in the field (Different sources give slightly varying numbers and statistics about the battle.)  Yet, despite being vastly outnumbered the Northern forces prevailed.  The lay of the land made it difficult for the South to get a good view of the entire Northern force so they likely never realized they held such a strong advantage in sheer numbers.  But the differences in equipment was the primary factor that led to the confederate defeat.  This was a cavalry battle and the Southern cavalry were armed with single shot, muzzle loading rifles.  After their first shot it was almost impossible for them to reload on horseback. (Their usual strategy had been to maneuver into position on horseback and then dismount and fight on foot  but at Mine Creek the rapid cavalry charge of the North made that impossible.  The Southern cavalry was forced to fight on horseback – a significant disadvantage given their weapons.)  In contrast, the Northern cavalry were armed with a variety of shorter carbines which held multiple shots and which could also be reloaded much more readily in battle. Northern forces, overcoming their disadvantage in numbers, overwhelmed the Confederates.  Confederate casualties numbered 1,200 while the Union forces counted 100 casualties.

The site of the Battle of Mine Creek is only about 60 miles south of Kansas City.  It can easily be visited as part of a multi-stop Day Trip out of Kansas City which is outlined in an earlier article –  Civil War Day Trip. 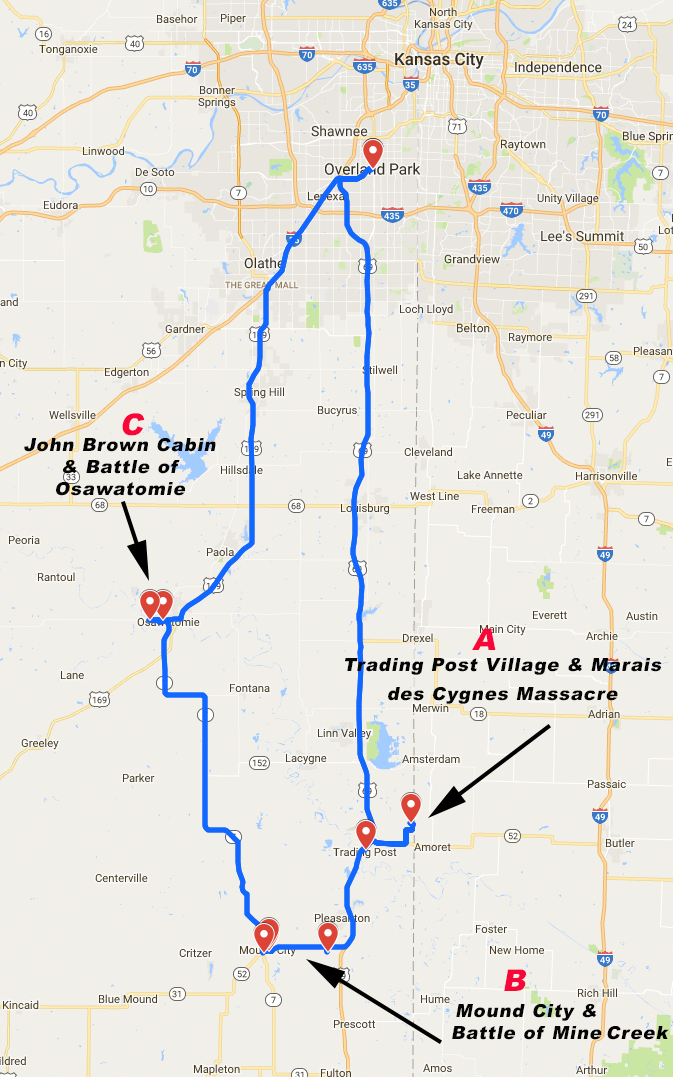 The Mine Creek Battlefield is maintained as a Kansas State Historical Site.  They have a very nice visitor’s center which includes a museum housing a variety of related artifacts.  Center hours are listed as: 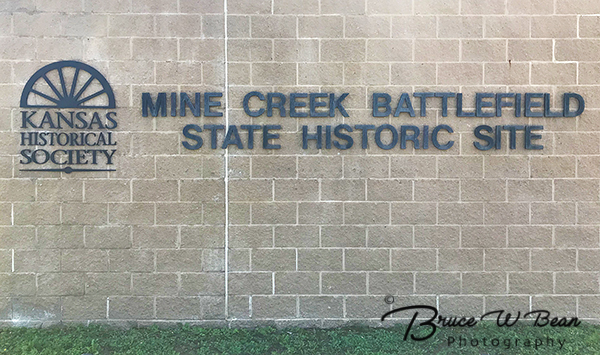 The Battle Fields Is A Kansas Historical Site 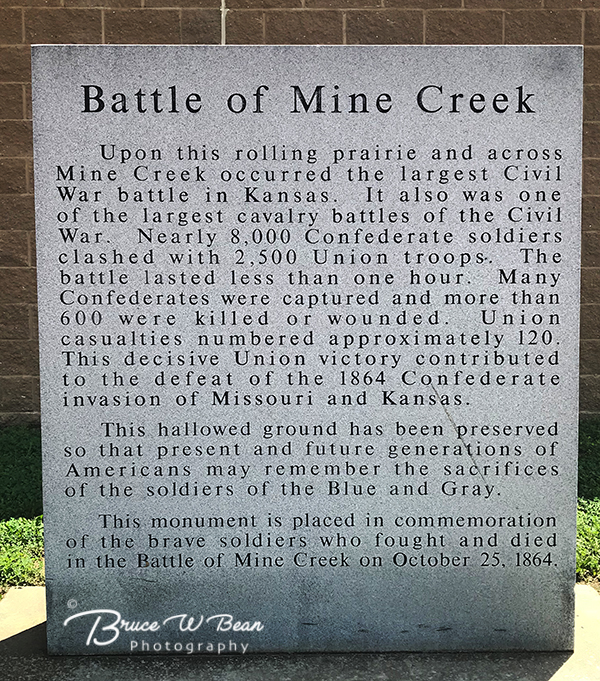 Inscription Outside The Visitor’s Center

The staff at the Visitor’s Center are very knowledgeable and helpful.  Below, a staff member shows the differences between the Confederate’s muzzle loaders at the top and the shorter, multi-shot carbines used by the Union Cavalry at the bottom which were used at the Battle of Mine Creek.

Confederate And Union Weapons On Display In The Visitor’s Center

The Visitor’s Center is located near the road on flat prarie land and well north of the forested area along Mine Creek.  Three connected trails explore the area as shown in the map above.  The trails are not paved but are mowed grassland.  If you decide to hike the trails it’s best to bring your hiking shoes and also take some water if the weather is warm.  I hiked the Prarie Trail which leads to a nice Confederate Memorial in a grove of trees. 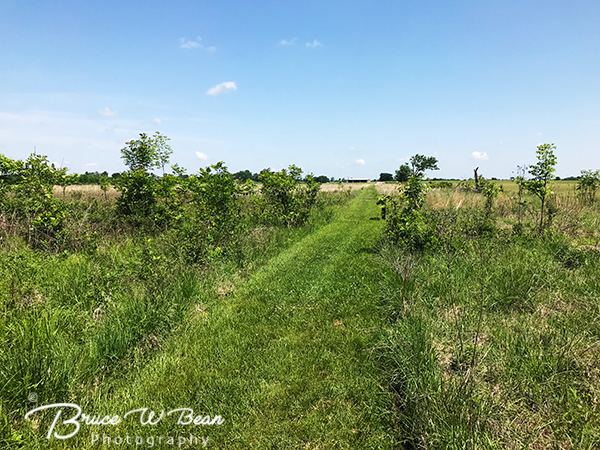 View Along the Praire Trail 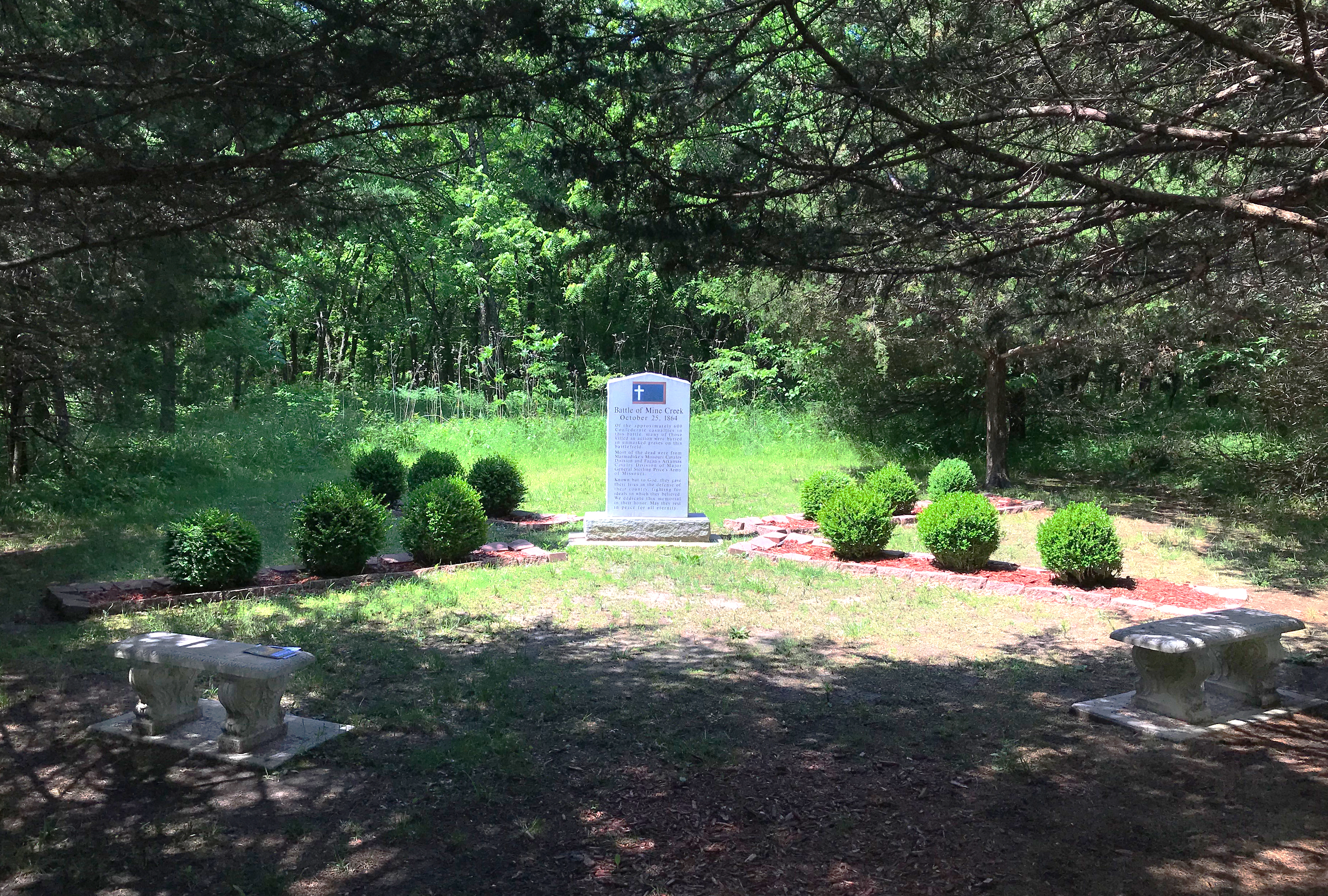 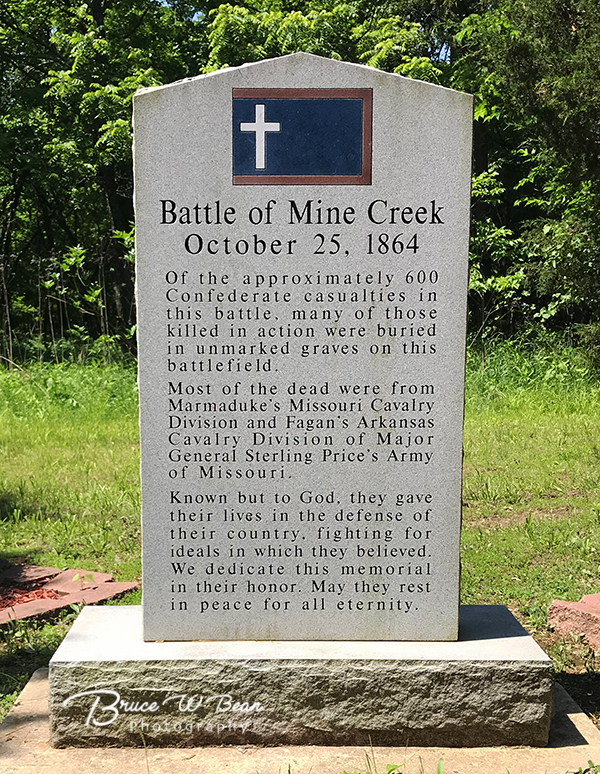 From there I headed out on the Creek Trail which leads to various sites along Mine Creek.  The trails are well marked and there are numerous markers along the way giving historical information about the locations and how the battle progressed. 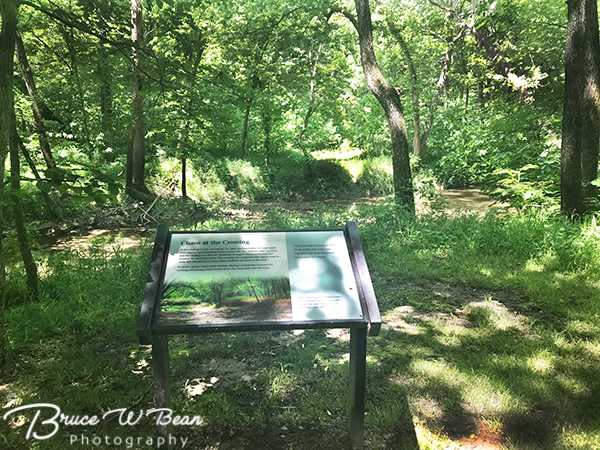 Descriptive Marker Along Mine Creek 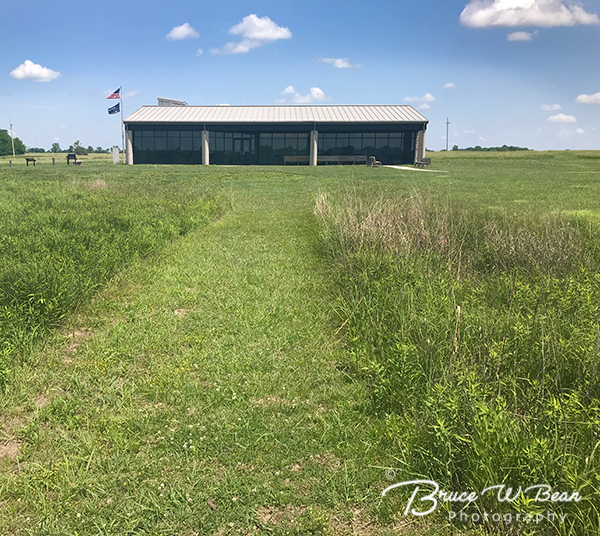 The View Walking Back To The Visitor’s Center

A Welcome Sight After A 2.5 Mile Hike On A Warm Afternoon

Future articles will describe other sites along the Kansas City Civil War Day Trip – Be sure to check back.

Visit The Civil War Mine Creek Battle Field ………. And Enjoy The Adventure!

Visitors to Kansas City are frequently surprised to learn of the area’s Civil War History.  The the region along the Kansas – Missouri borders was active in pre-war politics as well as Civil War action.   The Battle of Westport, a major North / South battle was fought on fields and hillsides which are now part of Kansas City.  Today you can follow the battle with a multi- stop Auto Tour of The Battle of Westport.