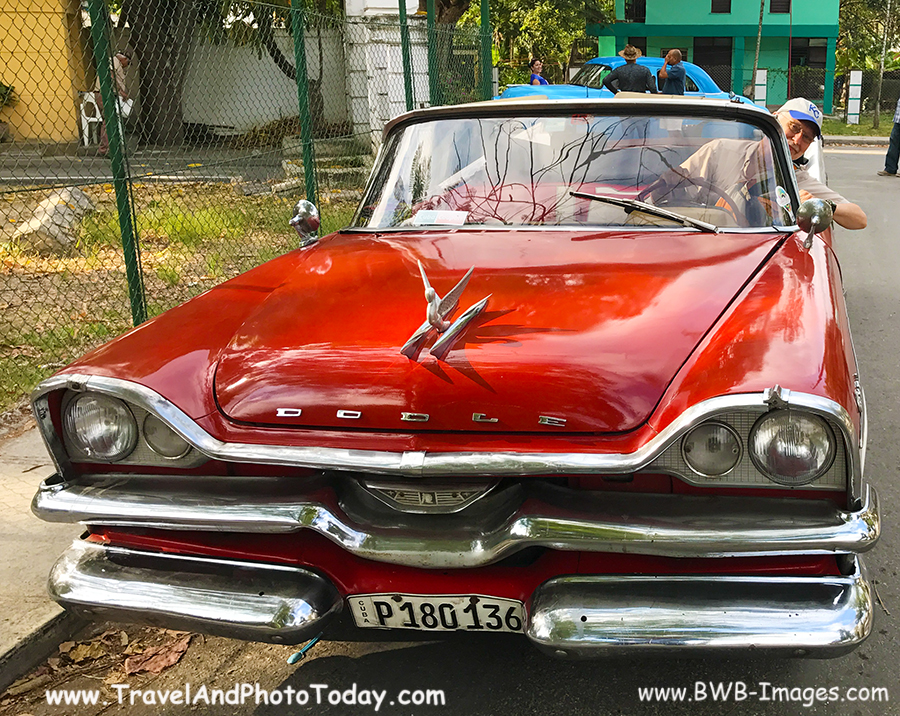 Hola Cuba!   For Americans, Cuba has long been a destination which was “so near yet so far.”  However, with recent reductions of travel restrictions, Cuba is now rapidly becoming a “go to” travel destination for Americans.  Of course, travel to Cuba still takes a bit of planning.  Americans are required to have certain travel documents (see related article – CubanTravel Planner – Required Documents ). Finding the right travel lodging and accommodations takes a bit of planning as well (see related article – Cuba Travel Planner – Accommodations).

Welcome to Cuba!  Congratulations!   You took the plunge, booked your trip to Cuba, and now you have arrived – most likely in Havana.  You’ve settled in to your hotel or Casa.  Now – how do you get around within the city?   In-city travel is really no problem in Cuba. City travelers in Cuba have numerous options available to them. 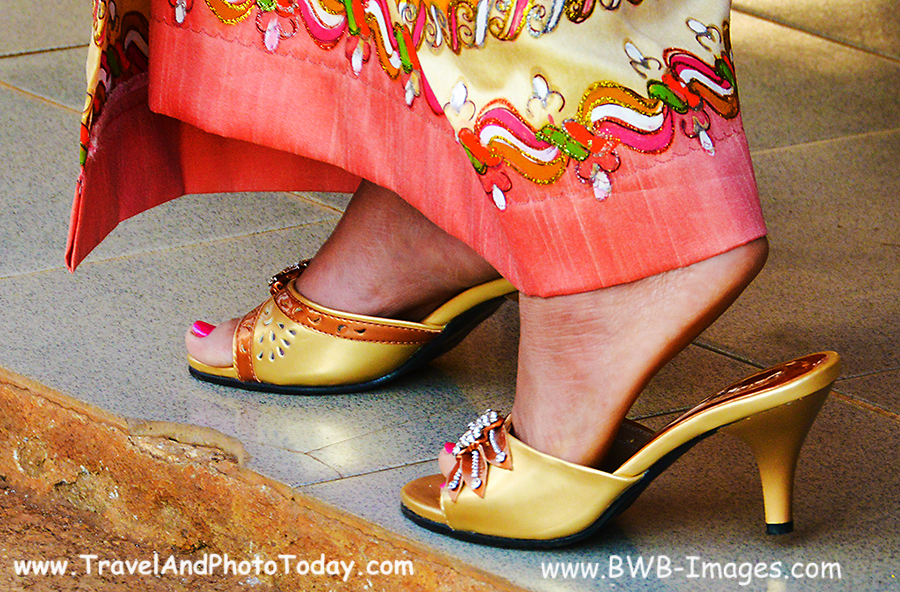 The streets and neighborhoods of Cuba are generally quite safe.  So why not get out and experience Cuba “Up Close and Personal?”  Put on your walking shoes (not those shown above by the way)  and take a walk. Walking is a great way to get a feel for the community.  Walking let’s you slow down and “be in” Cuba rather than just doing a “drive bye.” You can meet the people, visit the shops, hear the sounds (You like music? It’s everywhere.) and get a sense of Cuba. You will find that Cuba is a friendly country. Walking is great exercise and let’s you work up an appetite for some of that Cuban food.  Cuba does tend to be warm, however.  But worry not.  If you need a rest there is almost always a nearby bar, restaurant, or paladar (restaurant run by a private owner – often in their home) where you can rest, cool off and enjoy a nice soda or maybe a Cristal – a lovely local Cuban beer.

Taxis are probably the type of transportation most often used by travelers in Cuba. If the distance you are traveling is too great, or if your feet are too tired for another walk, you’ll be happy to know that taxis are plentiful in Cuba. Indeed, some claim that everyone with a car immediately buys a “Taxi” sign which they put in the car window and they are in business. I’m not sure about that, but you will see all sorts of vehicles on the streets and most seem to have a “Taxi” sign in the front window. Cuba seems to have a rather wide variety of types of taxis, but most share one feature in common. Very few have  meters.  Travel cost is negotiated so it’s best to have some idea of how far you will be going and what a reasonable fare would be. Ask at your hotel or casa for help with these estimates. (And if your taxi does happen to have a meter – be sure the driver uses it.) 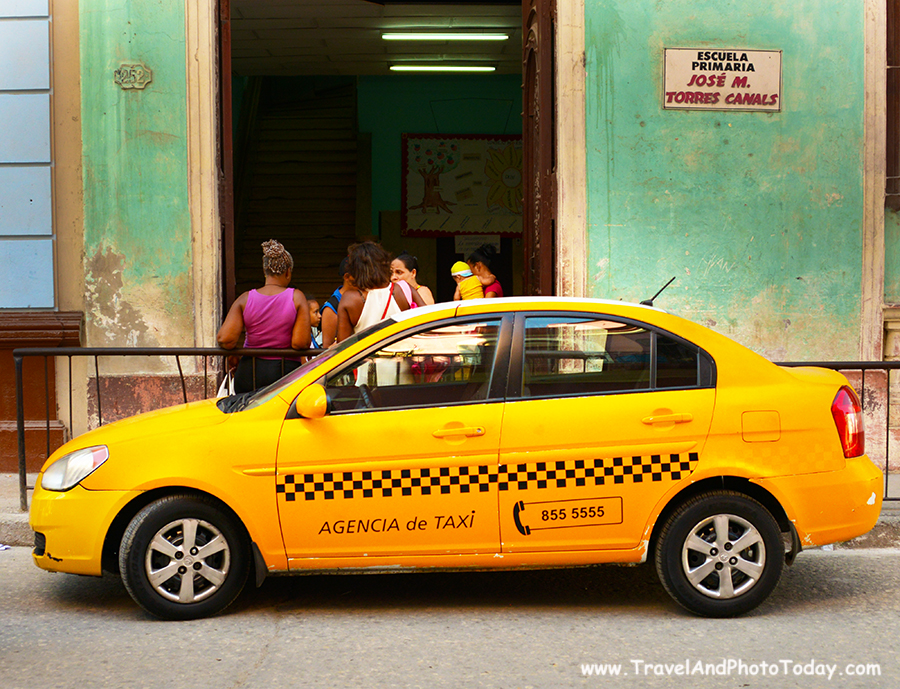 High End Taxi.  “High End” is my wording to distinguish this level of taxi from the more standard taxi you encounter in Cuba. This one is easy to identify by it’s typical “taxi” paint job. Some are yellow, some white, etc. But they look like a taxi.  They tend to be newer cars, are clean, are in good shape, and most seem to have air-conditioning.  You can call for pick-up or hail this type of taxi on the road.  A very nice ride but perhaps just a tad more expensive than a more standard taxi. 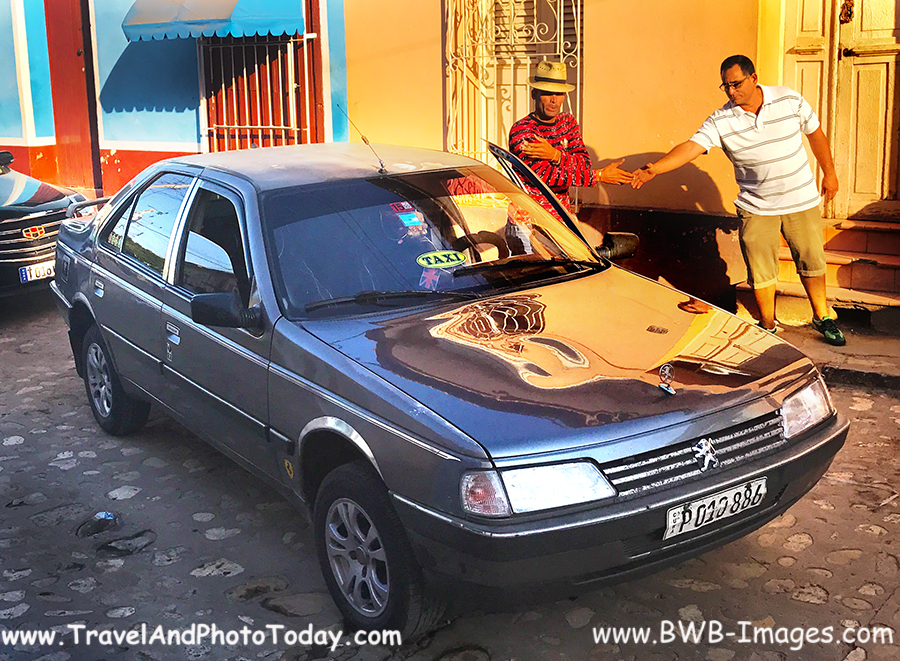 Standard Taxi.  A “standard taxi” (my wording) is most typically someone’s private car that they operate as a “taxi” according to their own schedule.  They put a “Taxi” sign in the front window (as seen above)  and they are open for business.  These vehicles can vary widely but most are older (as are most vehicles in Cuba).  They may or may not have air-conditioning.  Several I rode in had missing interior door panels and lacked window cranks and door handles.  (It’s difficult to get parts in Cuba.) If you want to take a standard taxi from your casa just ask your host.  They typically have a family member, friend or acquaintance who operates his (or her I suppose – although I never saw a female taxi driver) own taxi.  If you are in a hotel or at some restaurant or location frequented by travelers you won’t have any difficulty finding a standard taxi.  They are waiting for customers and more than likely several will ask if you need a taxi.  You can also hail a standard taxi on the street. These taxis tend to charge a bit less than some of the more fancy “tourist” oriented vehicles. Again, negotiate. 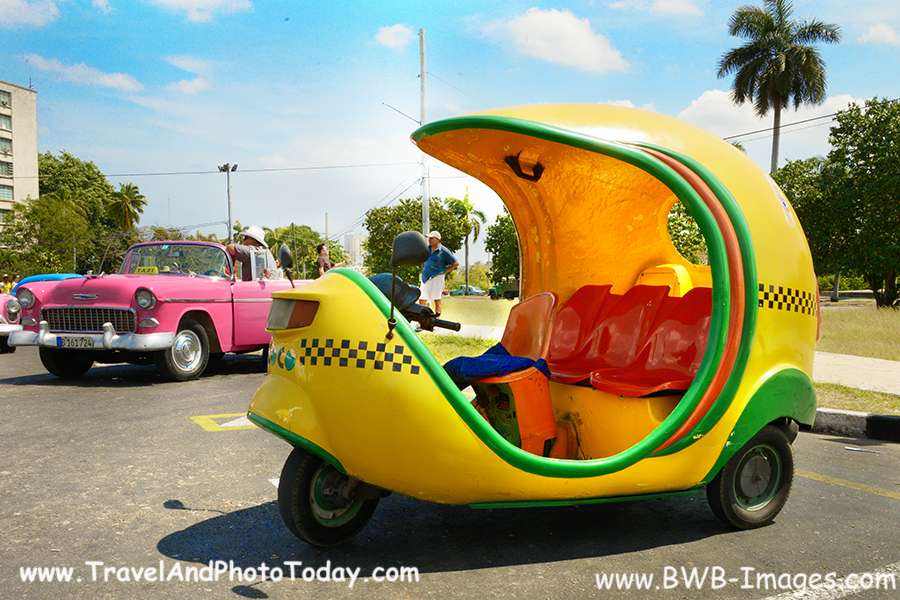 CoCo Cab. These odd looking little vehicles seem to be unique to the Cuban roadways.  In fact, I only encountered these little yellow bug-like cabs in Central Havana.  They are underpowered and carry only two passengers. Best used   only for short distance travel. If you jump into one of these little guys you are clearly labeling yourself “TOURIST” but they can be a fun ride. Again, because of their tourist focus, a bit more expensive than the more normal taxi. 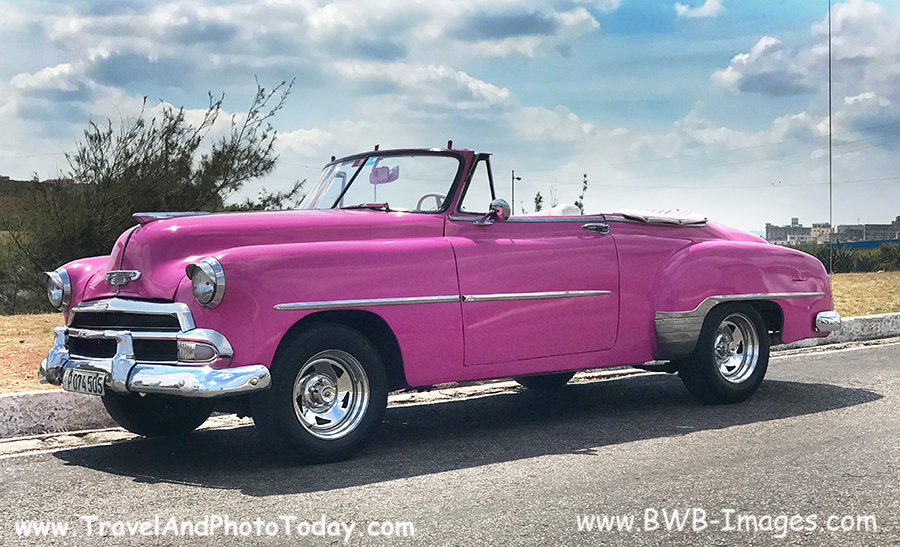 Classic Car Taxi.  Cuba is the land of the Classic Old Car.  For a “few bucks more” than a normal taxi, you can travel around the city (mostly Havana) in style. The classic cars are really more of a rent-by-the-hour ride than a true place-to-place taxi. They are a unique Cuban experience and a good way to take a city tour.

Pedi-Cab. Some wouldn’t even refer to this as a “taxi”.  I know I didn’t. But these drivers take their ride seriously – offering “taxi service.”  You will frequently encounter these little vehicles in more central and congested areas of cites and also in smaller towns.  If you ride a bus to a new city they will likely swarm around as you disembark hoping to take you to your casa or hotel.  A pedi-cab ride is an interesting experience and a way to see the sites slowly and up close without wearing yourself out with a walk in the heat.  But I must say the drivers work hard for their money.  Cuba can be hot and some of those streets have hills and are paved with cobble stones. You might consider tipping accordingly.

City bus service is available in some of the cities of Cuba including Havana. Some buses run standard bus routes for city transport and others are more oriented toward visitors and tourists.

“Common Bus” or “Guas-Guas”. Cuba has local, domestic buses which run various routes in several cities including Havana. These “common buses”, which are often times older school buses, are known in Cuba as “gua-guas.” Gua-guas come in a variety of colors, as many were donated by the Soviet Union or Canada. I admit, I never rode one but I did see them belching dark smoke as they slowly cruised through Havana, loaded with passengers leaning out the windows.  Several Cubans actually told me these buses weren’t for tourists but were reserved just for Cubans.  Apparently this is not necessarily the case. A traveler can use them if they can figure out how.  Schedules and routes are not readily available so they are not really tourist friendly.  Common buses do provide many Cubans with daily and basic transport within the city but the service is known to be a bit unpredictable, often crowded, and in the hot climate most tend to be very warm.  With limited time in Cuba I decided to find more efficient transportation.  Still, there are those who report that riding the Guas Guas is worth the trouble if only to get a sense of daily life for Cubans.

Several larger cities offer Hop On Hop Off bus service for travelers. They are a good and relatively cheap (@ $5 for a day pass) way to get an overview of an area before heading off on your own.  In Havana there are three different routes.If you are lucky you might be able to get route information from an Infotur Office, Cuba’s official tourism company.  I used the Hop On Hop Off Bus in Vinales and it was great because some the sights there are fairly spread out. These buses are modern and air-conditioned.  In Vinales there were signs with schedules at each stop which was very helpful.  And the buses ran on time – not always the case in Cuba. Be advised – these buses do tend to be popular so people start to line up at stops early during prime tourist times of the day.

Be sure to check back for a future article on