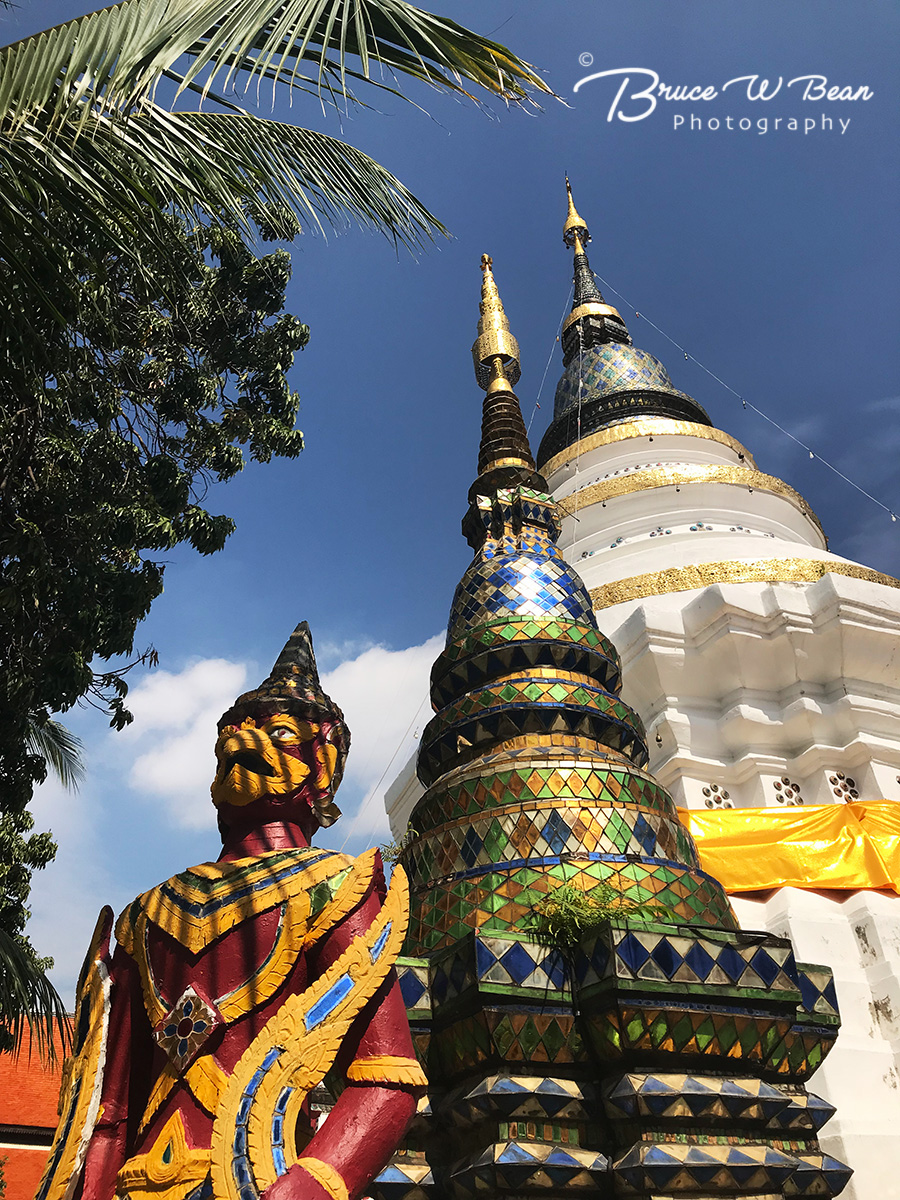 Chiang Mai, Thailand is truly a city of contrasts.  It is up to date, trendy, and boasts many modern features – theaters, great restaurants and upscale shopping malls.  But Chiang Mai is also an ancient city. The population is overwhelmingly  Buddhist and the city is replete with Buddhist influence, symbols, locations and temples. In fact, there are over 300 Buddhist temples in Chiang Mai. (If you would like to read about some favorites you might like Wat Phra Singh , Wat Sri Suphan and Wat Phrathat Doi Kham .)

All of Chiang Mai’s Buddhist temples are beautiful and unique in their own way. Some are large, grandiose and extravagant while others are more well-known for their gorgeous  artwork. With such a large number of temples in the city it is not possible for travelers to visit them all. Indeed, tourists who attempt to see too many temples during their visit frequently become overwhelmed and run the risk of developing a local affliction commonly referred to as “being templed out.”   Because of this, most tourists tend to stay on the” tourist trail,” visiting a smaller number of the most popular (and easily accessed)  temples in the city. But as some would tell you, it is sometimes better to take the road less traveled. And so it is with temples in Chiang Mai. Yes, you should certainly see the popular and well-known temples on “the tourist trail.”   But if time allows, it’s wise to seek out and explore some of Chiang Mai’s more hidden and less well-known temples. Your efforts will be well rewarded.

The Perfect Coffee Mug For The Traveler 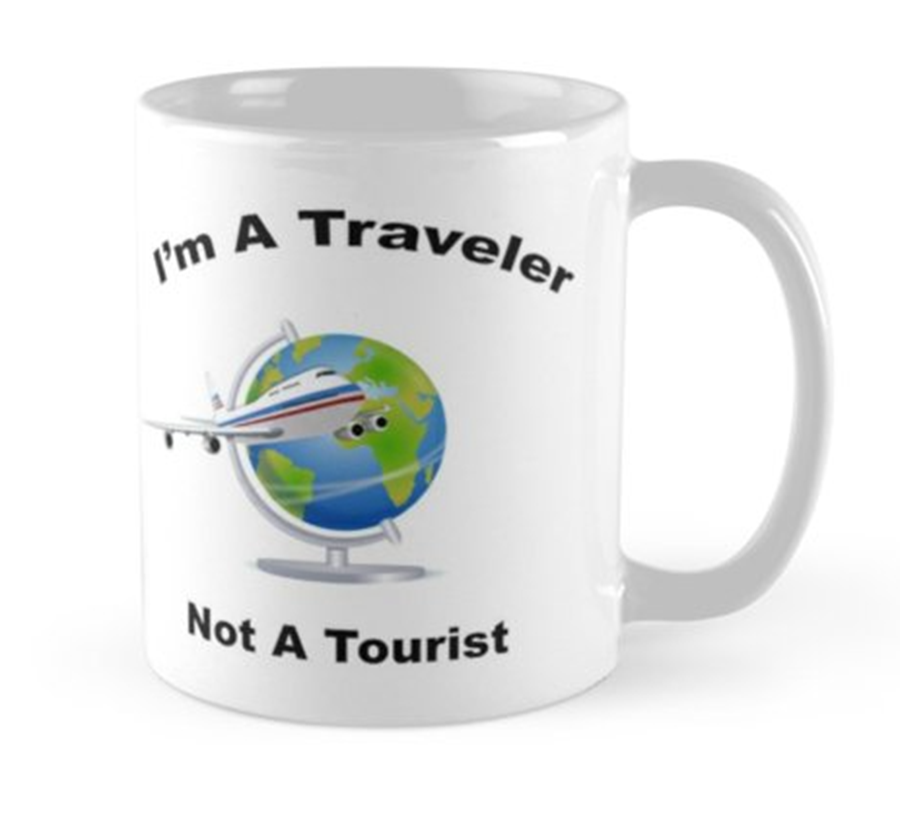 Also available on other items like T-Shirts, phone cases and throw pillows

Wat Ket Karam is a small temple complex located just east of the Ping River near Central Chiang Mai. It seems to be one of those hidden gems which is most often discovered by by tourists accidentally as they wander this section of the city. Wat Ket Karam is not on the high profile list of temples on “the tourist trail” and tourists seldom know of it let alone seek it out as a specific destination.  Most of those who visit the Wat are locals who have come for worship, temple activities or meditation. It is a delightful little temple with a tree shaded courtyard with a large stupa at it’s center.  The courtyard is surrounded by a variety of interesting smaller temple buildings as well as several tree shaded gardens.  It’s generally a very quiet and peaceful location and has the added advantage of being rather cool, even in the middle of hot and sunny Chiang Mai days. 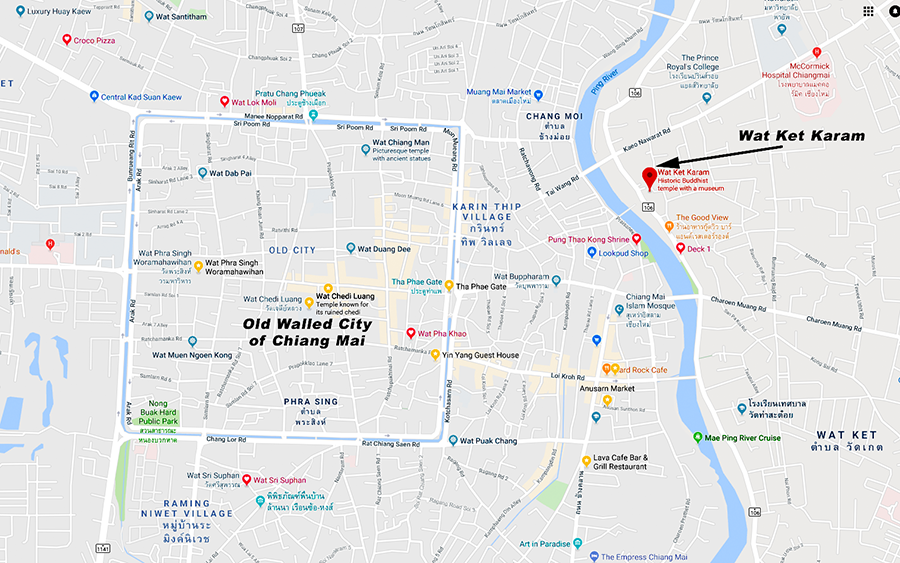 Wat Ket Karam was built around 1428 AD. That would be 1971 BE, according to Buddhist Era dating  which numbers years from the year of Buddha’s death (Paribbāna) which is believed to have occurred  around 544 BC.   The center of the temple’s courtyard is dominated by a white stupa with a golden tip.  If you look closely you may notice that the topmost golden spire is tipped slightly away from vertical.  This is not the result of some accident or engineering error.  A plaque at the stupa’s base (see below) explains, “The spire of the pagoda was purposely made tilted in order to (a)void indecency by pointing it to the one in heaven.” 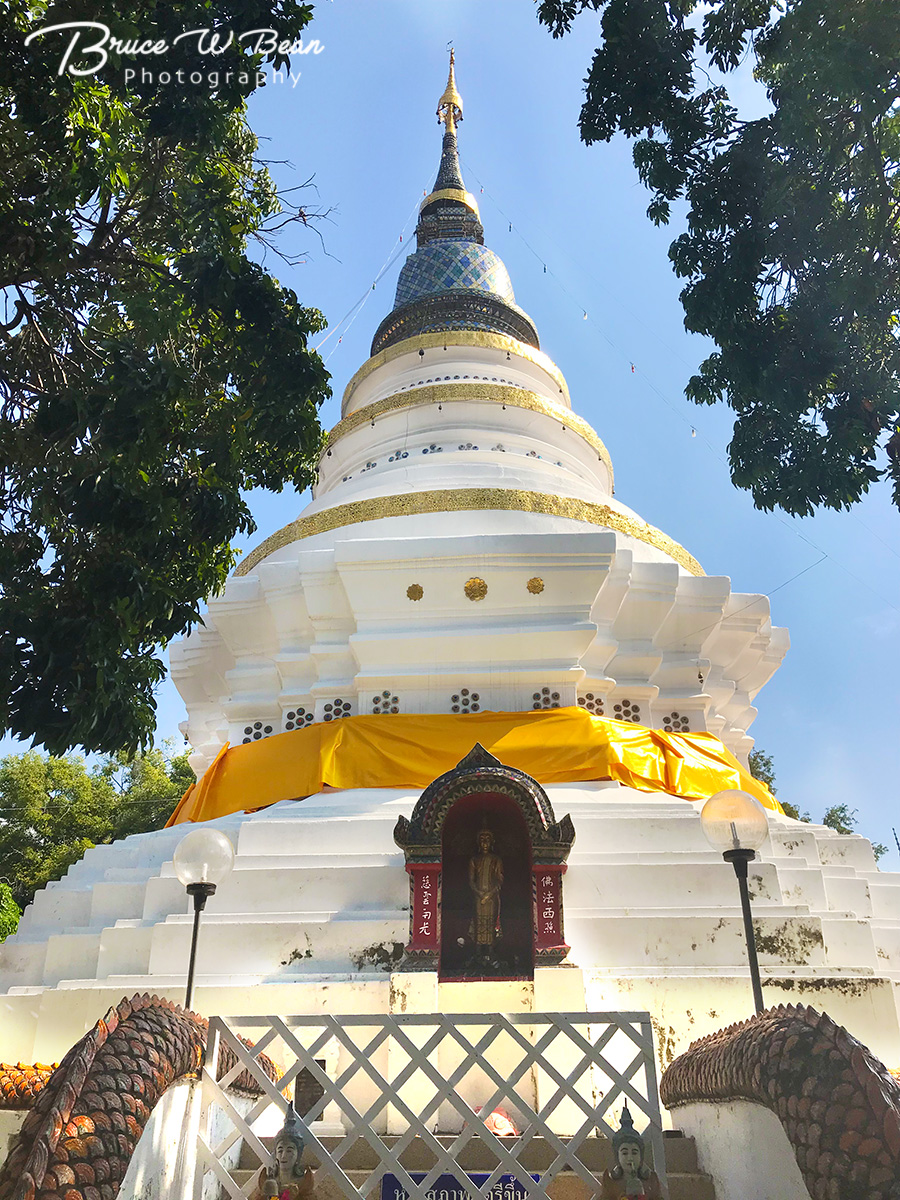 Wat Ket Karam is a Buddhist Temple devoted to the Dog, associated with the animal of the Chinese Zodiac.  Keep your eyes open. As you walk through the temple you will discover a number statues of dogs – some with gifts and offerings at their feet – others decorated with floral offerings.  There are also numerous dogs wandering the grounds.  In this wat the dogs appear to be well fed and cared for. 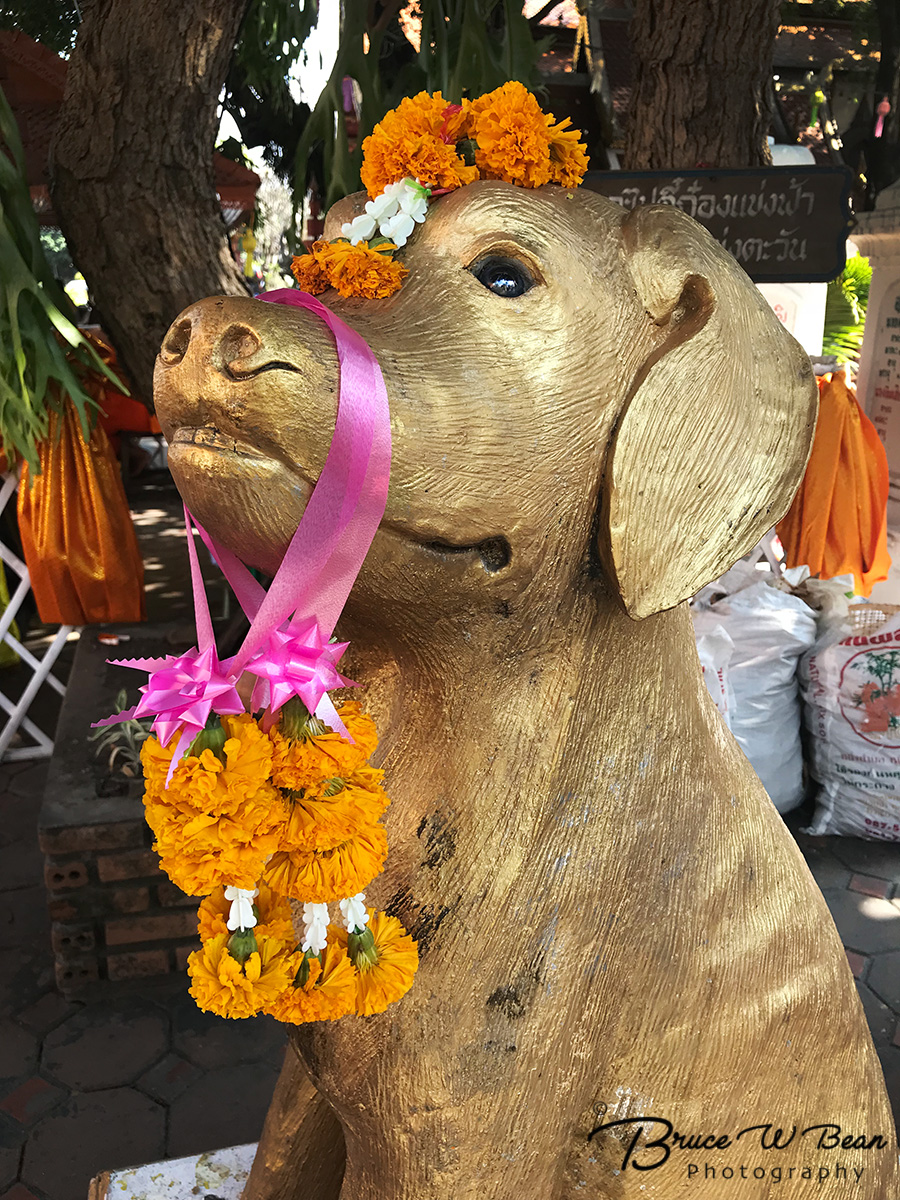 As Buddhism grew and evolved, it adopted use of the 12 Animals of the Zodiac .  A person’s year of birth, and hence their Zodiac animal, is of significant importance to Buddhists. As the plaque at the temple (see below) explains, “It is further believed that all human beings, when (they) pass away, their souls will remain at the pagoda (stupa) depending on the animal signs of the years they were born.  While still living, it would be auspicious throughout their lives to worship the pagodas, which (wherein) dwell the same animal birth signs of their own.”  Wat Ket’s pagoda represents the birth sign of “Dog”.”  The “Year of the Dog” includes 1935, 1947, 1959, 1971, 1983, 1995, 2007, and 2019.   So if you were born in one of those years then Wat Ket Karam is your kind of temple!

As a personal note I might add that I was born in one of those “Dog” years – I’ll leave you to speculate which one. And I admit I was  one of those travelers who had never heard of this particular temple.  And yes, I was wandering the area east of the Ping River  searching out a nice riverside restaurant for lunch when I quite literally stumbled upon Wat Kat Karam.  Intrigued, I entered and explored. I very much enjoyed temple, all the time having no idea that it was “my temple.” You see,  I’m not really up to speed on the Chinese Zodiac. Only later research revealed my birth year to be associated with the dog and dog temples.  Yet there I was, in Chiang Mai, Thailand – for some strange reason finding and enjoying The Dog Temple.  Did the temple in some way speak to me and help me find my way?   Perhaps…….. 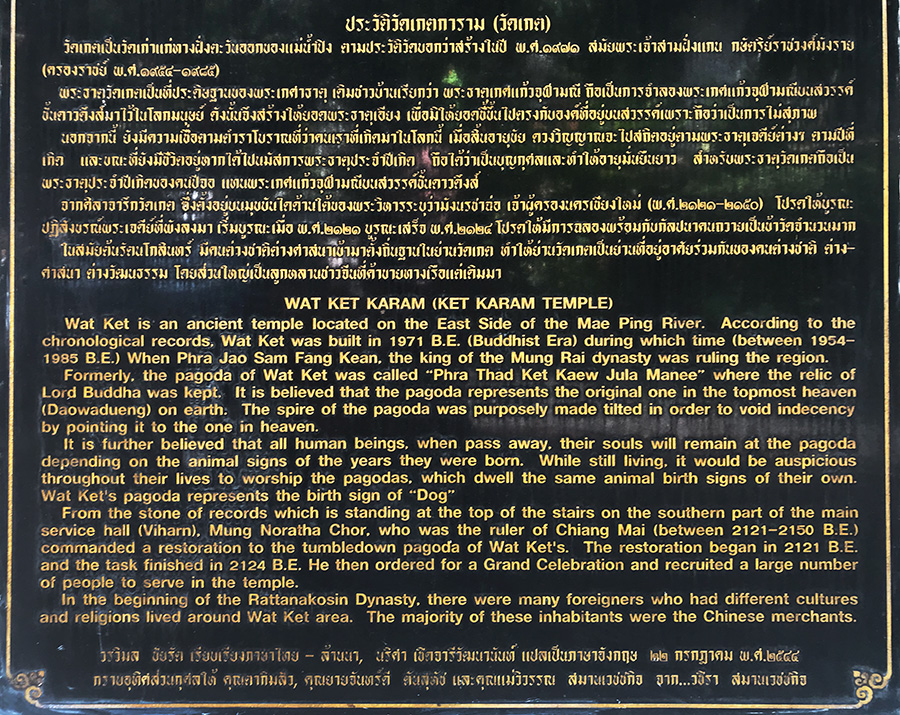 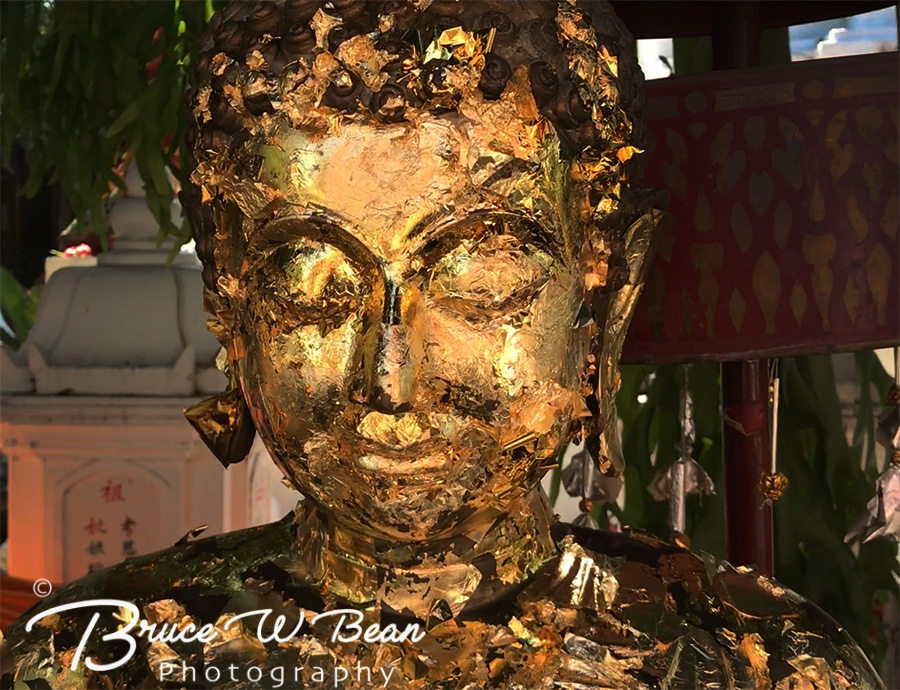 Visitors can purchase small, paper-thin pieces of gold leaf from vendors on site.  The gold leaf is then rubbed onto various statues and images located around the temple as devotions and offerings. 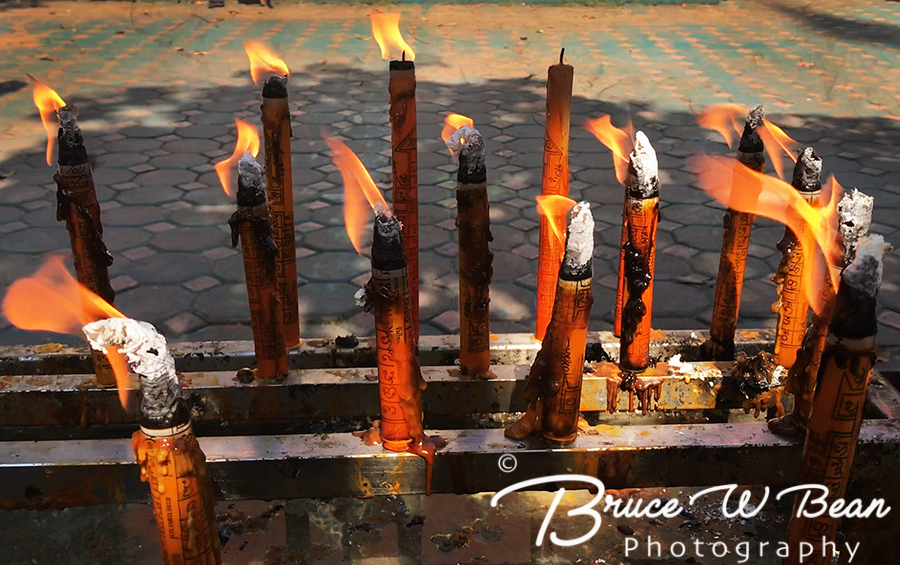 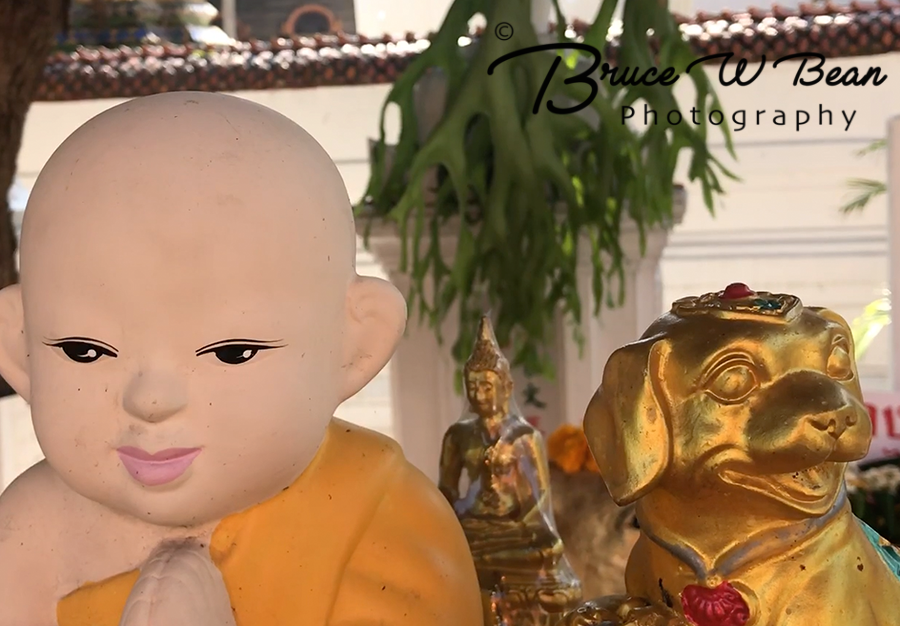 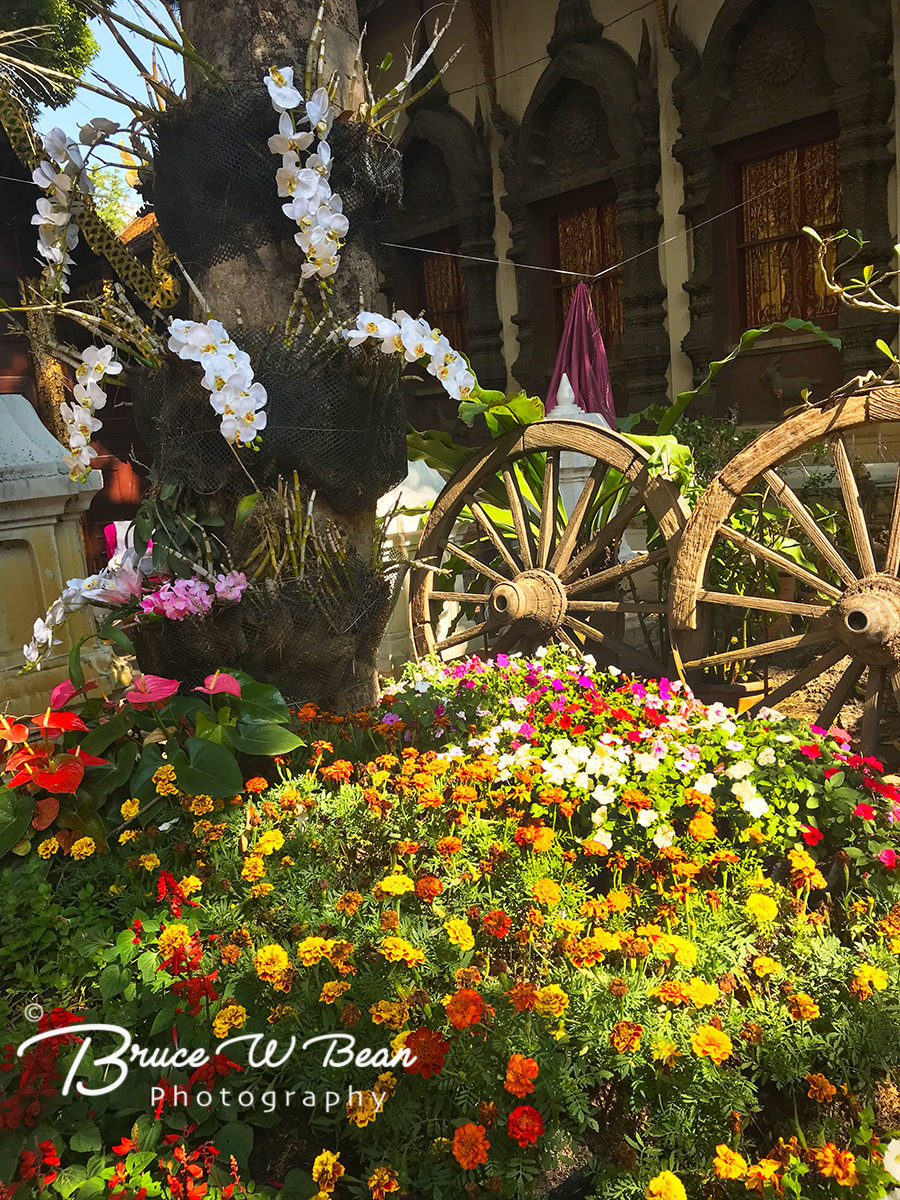 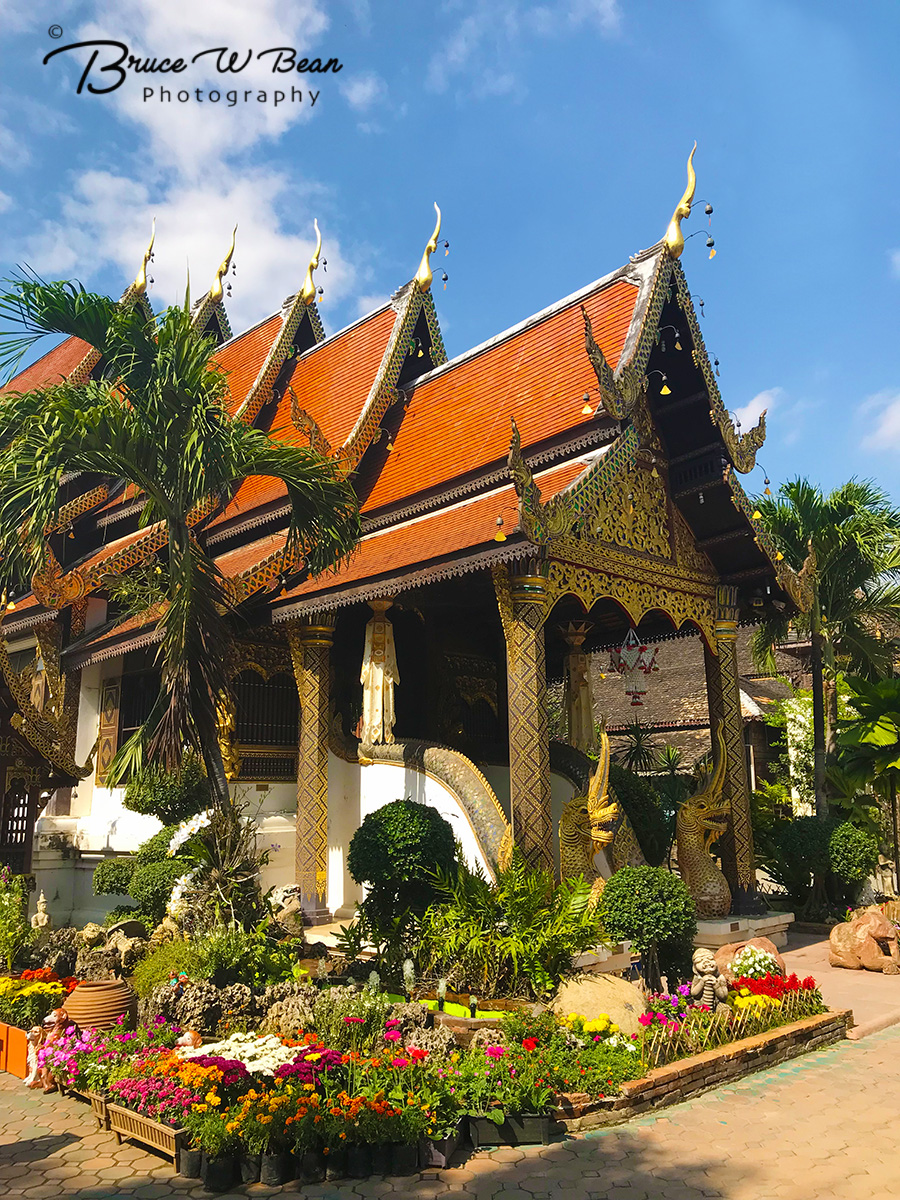 Traditional serpent lined stairs lead to classic Thai doorways on one of several temple buildings in the area. 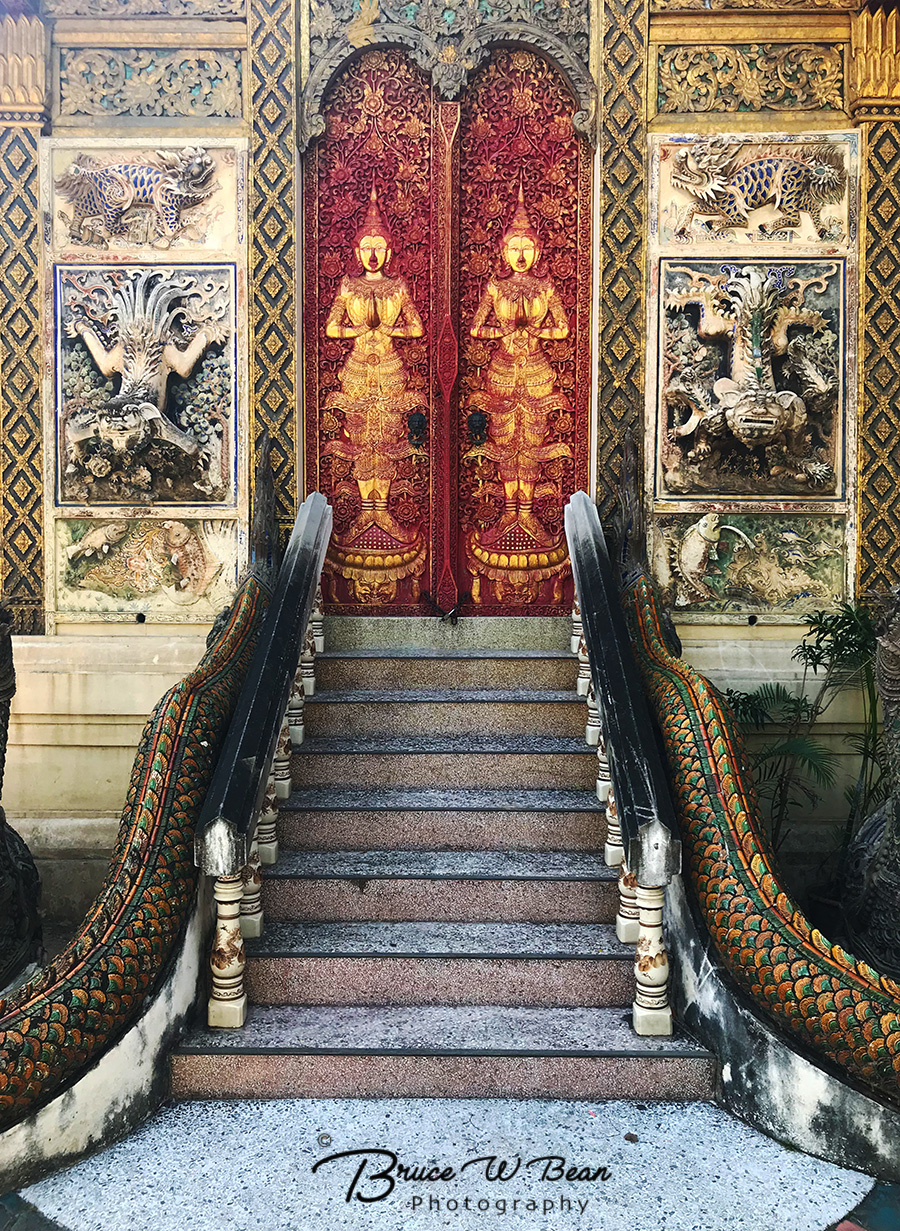 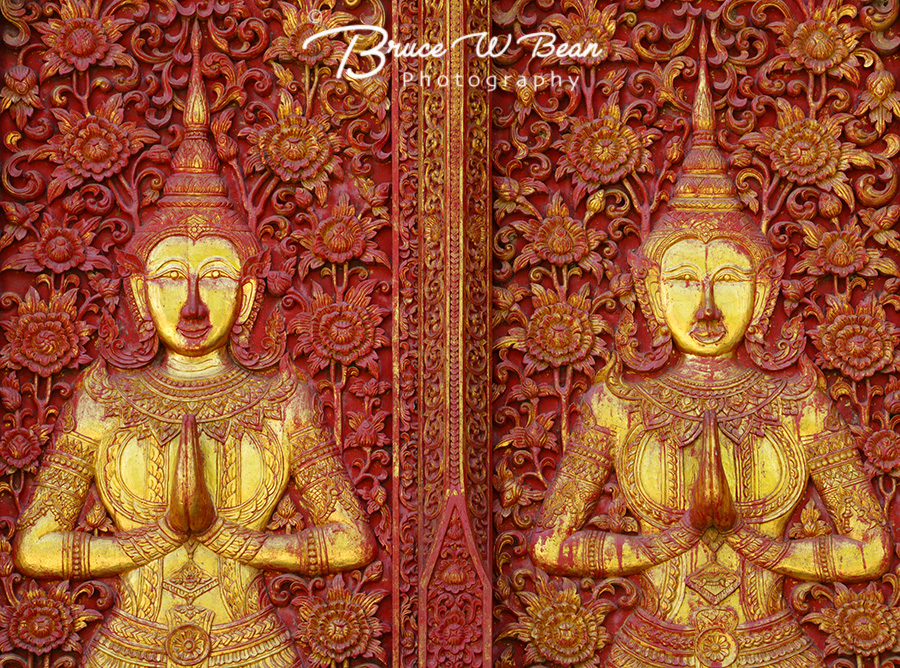 One of the temple’s buildings houses the Wat’s museum – a small and somewhat quirky mish mash of rather random items related the temple’s history. 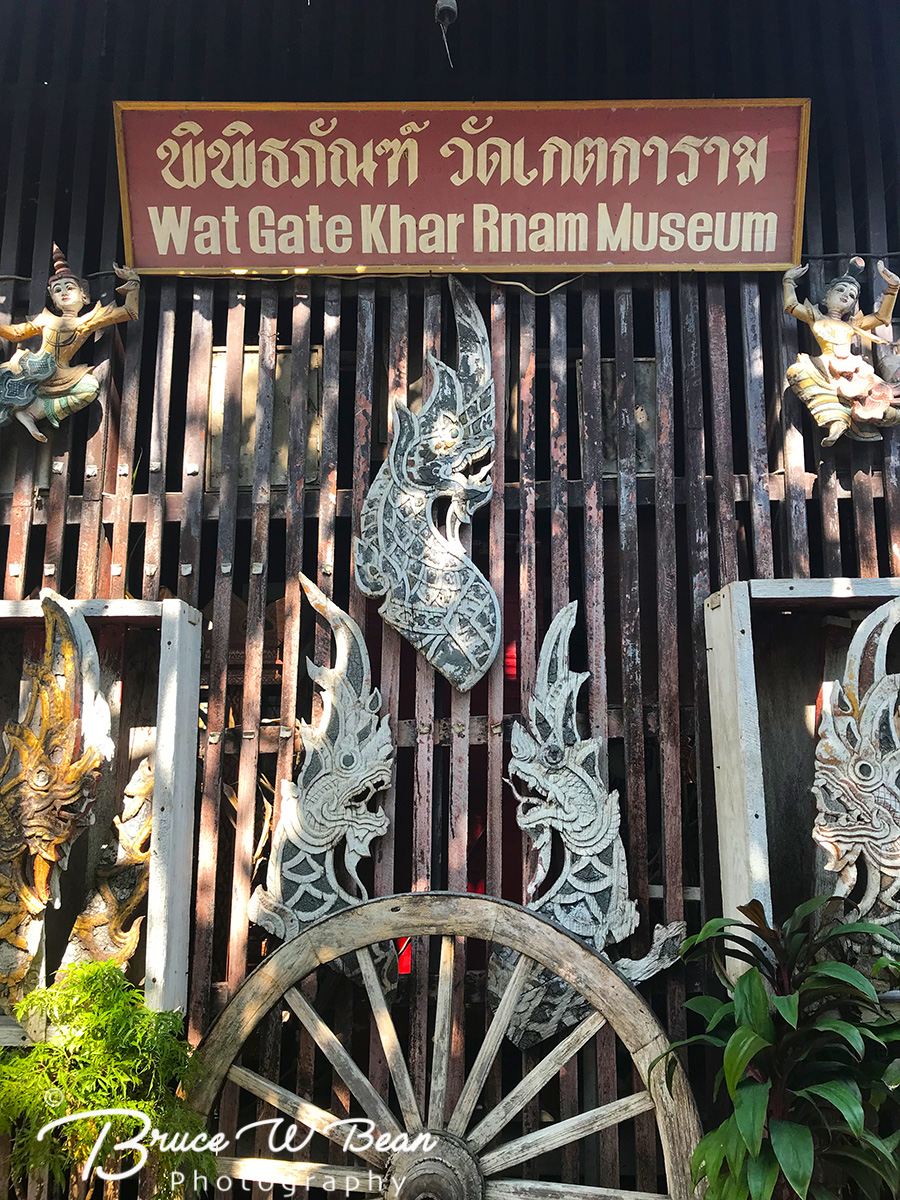 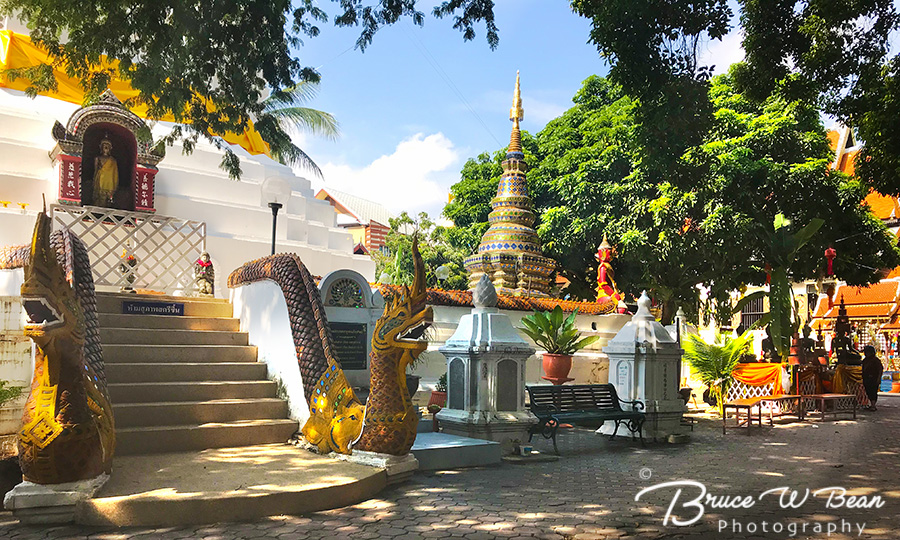 If you were born in a Year of the Dog –  if you like dogs – or even if you are simply looking for a charming and shady wat as a place for a nice visit and a bit of relaxation –  Wat Ket Karam may be just the place for you.  Stop by.  Check it out. You’ll be glad you did.