Welcome to Flashback Friday – Where we share previously published articles which were reader favorites. Hope you enjoy this Friday’s article, originally published in May of 2013, about A Visit To Smallville, hometown of SUPERMAN! To get the gist of the adventure – read these related articles from the same visit:

A Proud Day In Smallville

(A Cautionary Note for A Day In Smallville – Let me start by saying that on any other day, Smallville Kansas goes by the name of Hutchinson.  But for one day only, June 21, 2013, Hutchinson was renamed ‘Smallville.’ Confused?  Read Here and Here for background.  In this article I use the name Smallville in honor of that special day. )

A DAY IN SMALLVILLE – 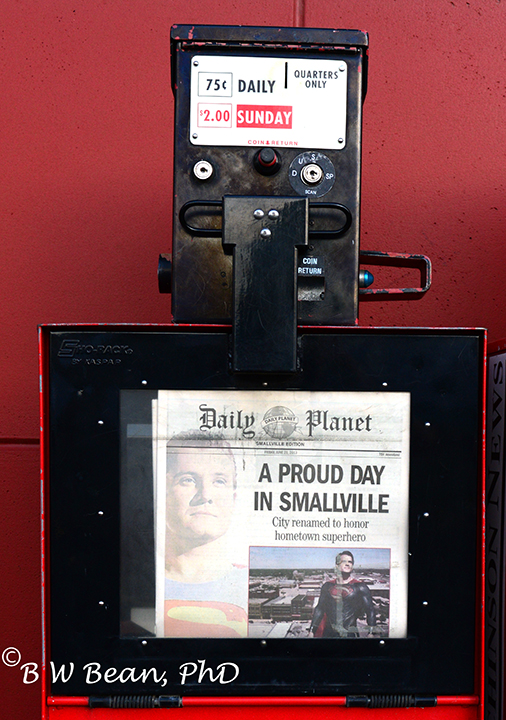 My Day in Smallville started at the Newspaper Stand.  Had to pick up the Special Smallville Edition of The Daily Planet.  At 75 cents per copy they were a bargain.  I picked up four. 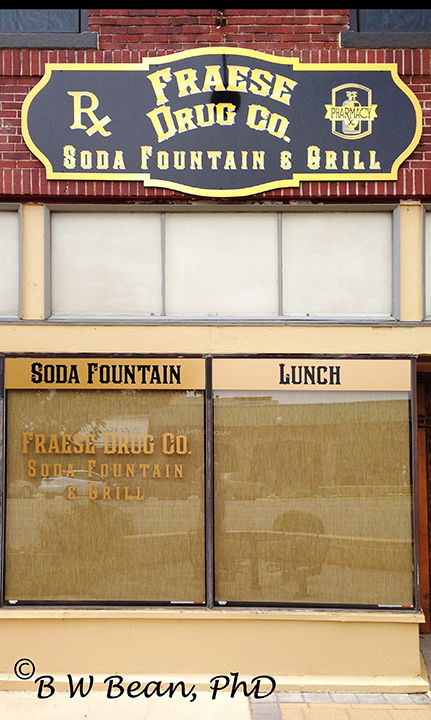 Armed with reading material apropos for this special day in Smallvile (  June 21,2103 ) I headed off in search of coffee and a great breakfast.  I found both at Fraese Drug Co., Soda Fountain & Grill at 25 N. Main Street in Smallville.  It was the perfect location, an old fashioned grill and soda fountain serving great food with that ‘time gone by’ ambiance. (Sad note of update / Fraese Drug Co. went out of business in 2016.) 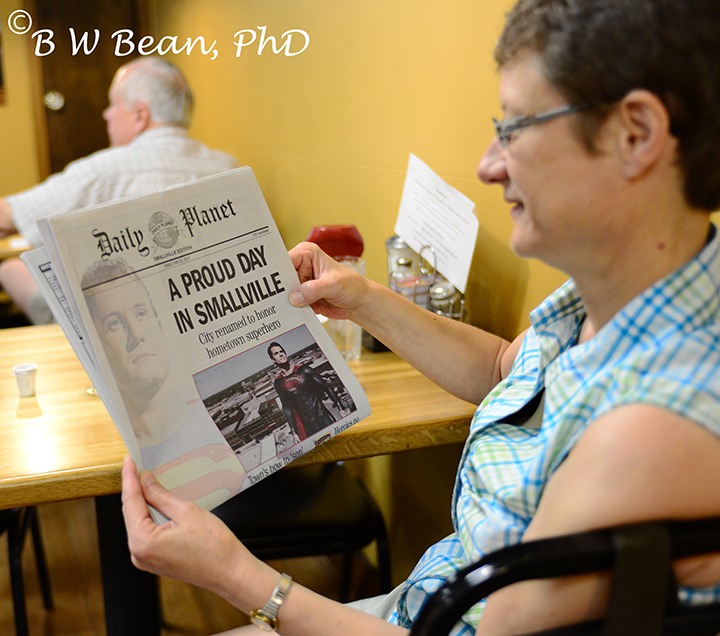 I quickly found that I wasn’t the only one intrigued with being in Smallville. Some local folks, such as the lady in the photo above,  enjoyed the idea of being residents of Smallville, if only for a day.  (photo used by permission, she preferred to remain anonymous – go figure)

Others however, were unimpressed.  I briefly joined a group of older gentlemen who gather at Fraese Drug & Soda Fountain in the morning on a regular basis to drink coffee and discuss the state of the world.  Several of them  it seems, had absolutely no idea about anything associated with the renaming of their town. I brought them up to speed and I have to say that, to a man, none of them were impressed. In fact, many of their comments were not suitable for print.  But then, that really didn’t matter because they declined to be identified or photographed.

Having enjoyed an outstanding breakfast, as well as some stimulating conversation with several natives of Smallville, I headed out to see what other evidence I might turn up related to the renaming of the town to Smallville and it’s connection to Superman and Clark Kent. 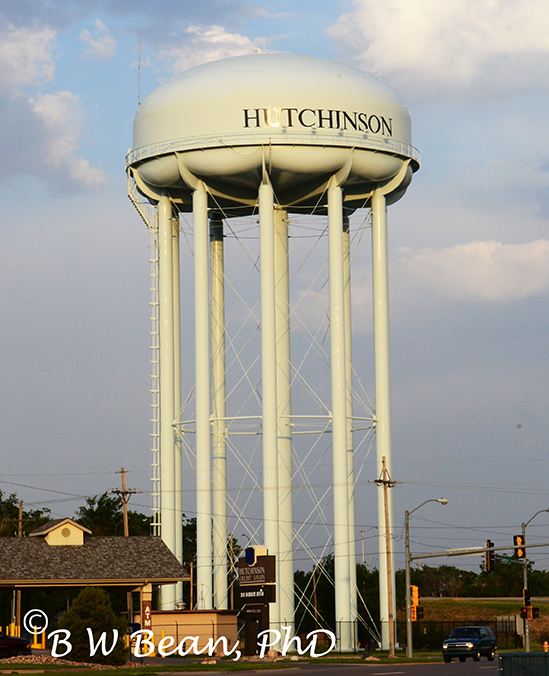 I drove by the water tower.  It still sported the name “Hutchinson.”  Somehow I was hoping to see “Smallville” up there in large black letters. Must be somebody in the Public Works department didn’t get the memo. 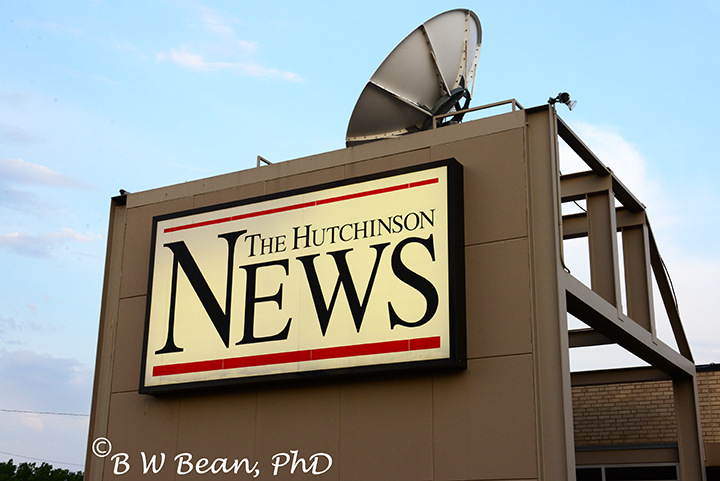 In search of a few ‘extra’ copies of the  The Daily Planet I drove over to the newspaper office.  Imagine my surprise. The same paper that had just published The Daily Planet had failed to change the name on it’s very own building! Talk about a major slip up!

I also have a ‘bone to pick’ with the local telephone company. I searched high and low, all over Smallville.  I found not a single telephone booth!  Now I ask you, where is Clark Kent supposed to miraculously change into his Superman garb when he can’t find a phone booth?  Maybe Starbucks?

I have to admit, I was beginning to think that this Superman Day in Smallville thing was perhaps just a bit thin.  I headed over to the U.S. Post Office and talked to one of the clerks. When I asked her if the Post Office would be using a special ‘Smallville” imprint to cancel letters posted in town today she just looked at me with q blank stare.  Okay, so I explained the whole deal again.  Seems she had never heard of Smallville Day in Hutchinson.  But she reassured me, seems they don’t actually cancel any of the mail in Hutchinson.  That is all done somewhere else.  Likely story.

I needed a break, so I decided to visit some of the special attractions that Smallville has to offer. 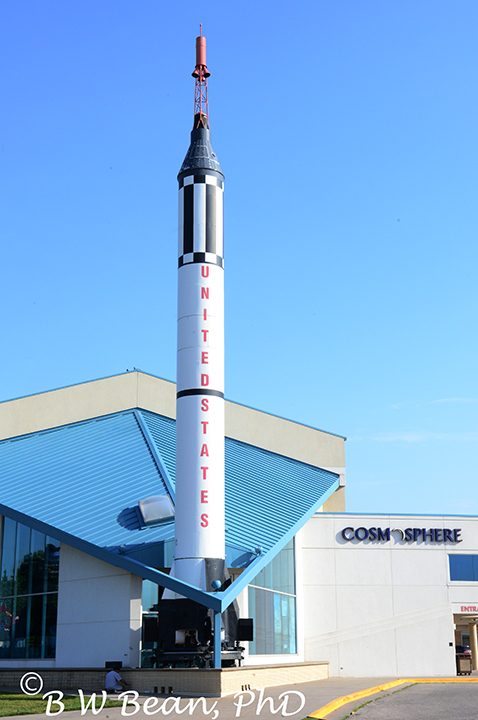 The Kansas Cosmosphere and Space Center is  a premier space museum.  The museum provides an an extensive  journey through the history of space exploration and includes outstanding, one of a kind exhibits such as the actual Liberty Bell 7, Gemini X, the Apollo 13 Command Module, and a moon rock brought back from the surface of the moon by Apollo 10 – the first Apollo Mission to reach the moon’s surface.

True, there was no Kryptonite.  But the city clearly has a special connection with space. 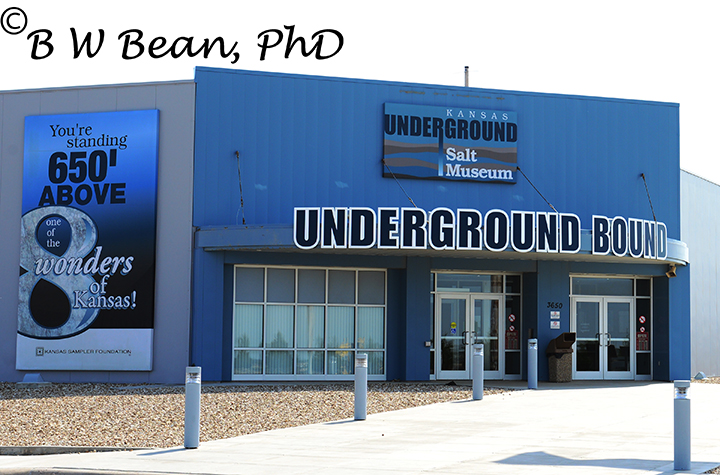 Next stop was the Kansas Underground Salt Museum.  As it turns out, 650 feet beneath Smallville there is a gigantic deposit of salt. Not exactly prime Superman stuff, but still, this was something I had to see. 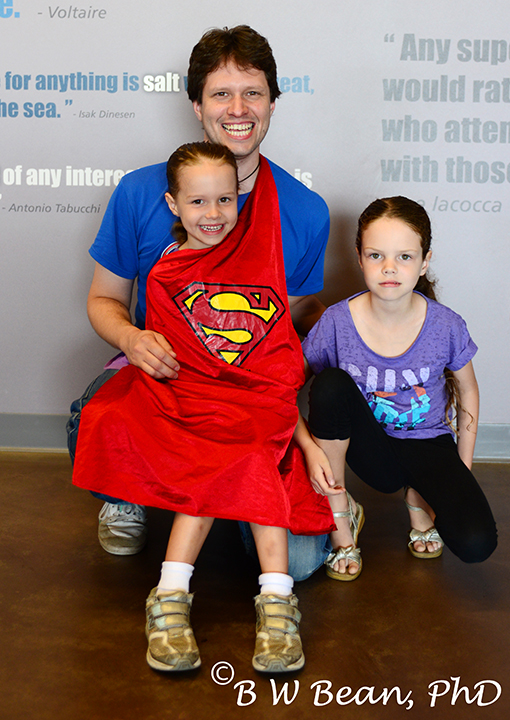 While waiting to enter the mine I happened to notice a young man with his two lovely daughters.  There seemed to be something special about them. Must have been the fact that he was wearing a Superman Cape.  A lovely family, Lenny Ellis and his daughters Avia (left) and Autumn (right) are from Sydney Australia and were visiting the salt mine. And even Lenny and his daughters – FROM AUSTRAILIA – knew they were in Smallville. (OK Smallville locals, let’s get with the program!)

With my faith in Smallville restored, I donned my hard hat and headed down into the very dark mine.  It’s quite a tour.  Various mines beneath Smallville provide all types of salt from table salt to salt for road safety. And beyond that, once that salt is gone there is a great deal of space left behind.  What do you do with that amount of empty space -space with  low humidity and a constant temperature of 68 degrees?  Well, you turn it into storage of course. Today, 650 feet beneath Smallville there are files and records from corporations, national agencies, and individuals.  Movie companies store their vintage films, props, and equipment in the vast empty blackness beneath Smallville. 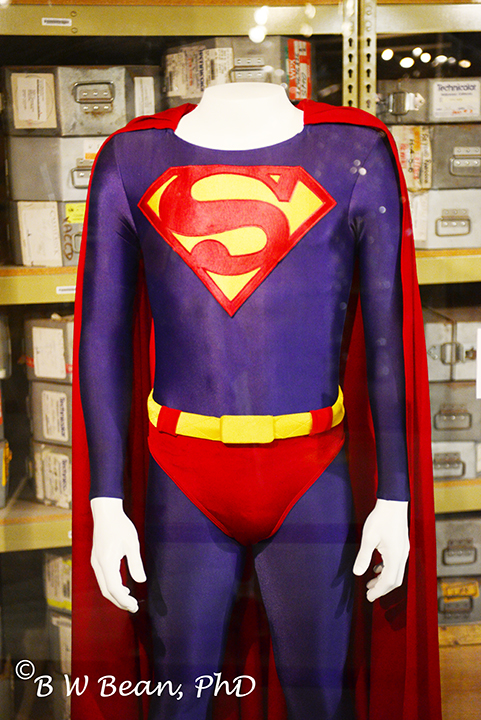 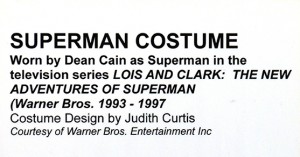 And that’s when I saw it – A Superman Costume!  Yeah – that’s what I’m talkin’ about!  It’s Smallville baby! True, it was just a costume.  But it was one of the ‘real’ costumes from a TV series. And of course, they couldn’t have one of Superman’s genuine outfits.  I imagine he keeps that part of his wardrobe under his personal protection.

And that’s how it was – A Day In Smallville.  It was a great adventure.  Saw some neat stuff, meet some great people.  And had a great time.  I’m hoping that Smallville arises in Kansas again next year.  Maybe they will even have T-Shirts!